The long summer days before we left to live in South Korea (five years ago now) was a repetitive sting of nostalgia for a place we hadn’t even left yet.  With just a few days until we boarded our plane to Daegu, I felt vividly that we would never return to the exact place and the exact people that we were leaving. This turned out to be right.

I remember sitting by the harbor at the final “Belfast Summer Nights” free music concert, astounded by the beauty of the boats and the water, and the land and the sky — things I’d seen every day for fifteen years, and never properly appreciated. I remember having a glass of wine with my closest friends, them comforting me and telling me that things wouldn’t change, and me crying because things already had. And I remember gathering with my brother and his family in Island Falls for one last weekend together at the lake, with that scourging pit in my stomach (the one that makes you long for things) unceasing. I missed everything — and I was still here.

I miss my son Garrett.  He’s still here, too, living with us and sharing meals and some family time once in awhile.  But his head and shoulders are already out the door, eyes looking forward to all the amazing things yet to come.  He’s a senior in high school now, and while we’ve been loving him and helping him reach his potential for seventeen years, it seems clearer now than at any other time that with every fleeting moment, we will never pass this way again.

In that same summer, pre-South Korea five years ago, all three of our children, along my brother’s three beautiful daughters, discovered what I think is a weed on the border of the road into camp in Island Falls.  I don’t know it’s name, but the bush is four feet tall or so and has orange blossoms as well as pods that explode in your hand when you pinch them (and if they’re full enough, even when you barely touch them.)  It’s such a delight, it makes us laugh out loud. 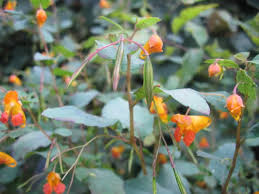 One day, the six of them came running into the camp asking for glass jars to collect the pods in. When I asked Garrett why they didn’t want to just pop them right away, he said, “To share them with you, mom. We have to save the best stuff if we can.”

Senior year has just begun and my heart is breaking over all the things I can’t save. I want to put him in a glass jar and keep him on a shelf.  I want to hold on to him, just the exact way he is right now…his perfect imperfect self.

I hope, even though it’s not possible to suspend or control his nature, that it’s not too much to ask that when he bursts out into the world, I will be there to witness it. That he’ll put in a jar all the things that mean the most to him. That he’ll share it with me still.

4 thoughts on “Stop This Train”