We’ve moved, ya’ll. We’ve left the hustle and bustle of the big city of Belfast. We’ve sold our house and are looking forward anew.

We’re living in a yellow house on 5 acres out in Searsmont. We have two hammocks and a bunch of rose bushes, a big ol’ fire pit and a gardening shed in which I’ve set up a workstation for planting and futzing around. I added white lights on the ceiling and the wall so when I’m working at dusk, it looks like a sparkly shed of awesomeness, which it is. There’s a male partridge who drums his wings most mornings, trying to get a female to also move to Searsmont, apparently. So far it doesn’t seem to be working.

We’ve been here a year, settling in and slowing down. It’s what we crave these days. It’s oversimplified to say we needed some breathing time after the craziness of the years our children were in school and so busy it felt our heads were going to spin off our necks. But there it is. 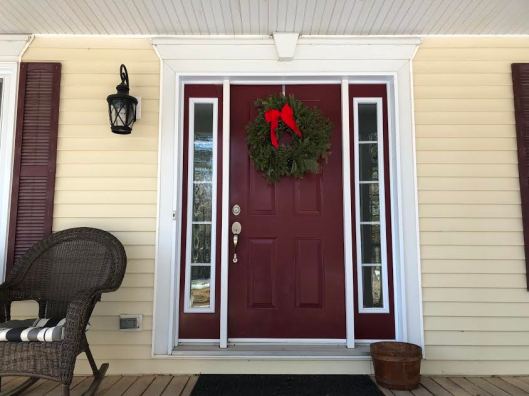 Natalie is in high school now but with just the one it’s manageable to sometimes need to drive back into town two or three times a day. It’s rare anyway. Mostly, I spend a lot of time staring at trees, wandering our land and finding out where the deer live and the fox burrow. So far I’ve noticed maple, birch, oak, cedar, pine and ash trees, along with two fat rabbits who make their home on the edge of the woods, near our fire pit, who both love the carrots and celery I offer so I can watch them nibble.

Life is slower, and purposefully so. Heading down to the local brewery for trivia night is our idea of fun right now. I’ve also taken up knitting.

It’s been a full year of quiet contemplation about my life and what it means, and who I am and what I want. Twenty years of raising my three kids, by necessity, kept my attention very much outward, and I am most grateful for them. Two decades of the rollercoaster of bliss, self-doubt, laughter, dismay and pandemonium that I dreamed of, and got to experience, is the greatest joy of my life so far.

But as the years of living with our kids wind down, I’ve been surprised and excited, recently, to realize I haven’t gone off the deep end. I’ve been hibernating, not surrendering: recovering, not withering. I’m gearing up for Act II.

It isn’t written yet.