Blimey, we’re home.  And I have a fecking ton of work to do, y’check?  So’s ye can bet I won’t be writin’ much in the comin’ weeks here on the ol’ blog.  Thought I’d leave ye, friends, with a list of some o’ the best things about the west coast of Ireland, from this lassie’s perspective.  Thanks a million!

1.  No high fructose corn syrup in food or drinks.  It makes a big, tasty difference.

2.  There’s no bad view from anywhere.

See?  This is just random countryside.

3. Live music every night in almost any pub.  I tried to upload a video here, but no luck.  The best we saw were The High Kings and Lumiere.  You can find them on YouTube if you’d like.

4.  Very patient, accommodating drivers (who drive on the left from the right side of the car, on roads that are sometimes one lane wide.) Phew. 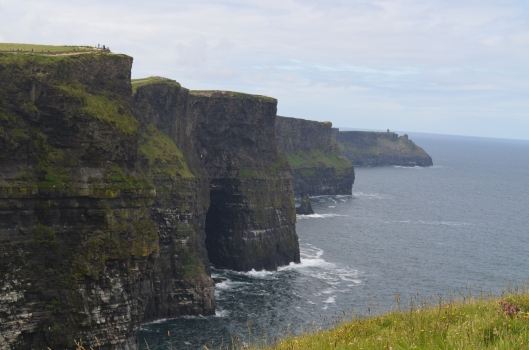 6.  Ruins are everywhere, and mostly you can just walk up to them and explore.

7. Hiking is everywhere, and you are most welcome to just hop on a trail and see where it goes.

… and this one brought big reward.

That’s Smithwick’s- but you get it.

9.  Cozy little towns that reminded me of home (and did I mention, Irish people were incredulous that we lived in a little town called Belfast.  We encouraged them to visit.) 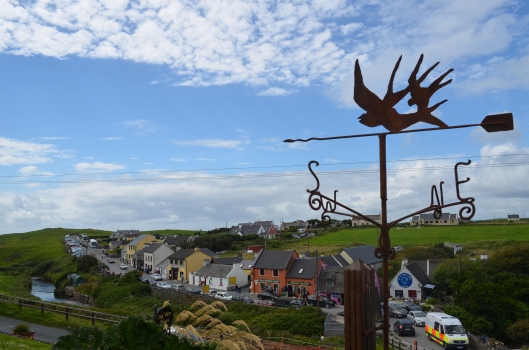 This is Fisher Street which makes up half of Doolin,County Clare.

10.  This.  The Irish sense of humor.  (Though dead serious about four things:  music, beer, whiskey and hospitality.)

Ireland stole my heart, and the hearts of these people as well.

As the Irish say, I’d do it again in the morning.

Oh, these people – they steal my heart every day. 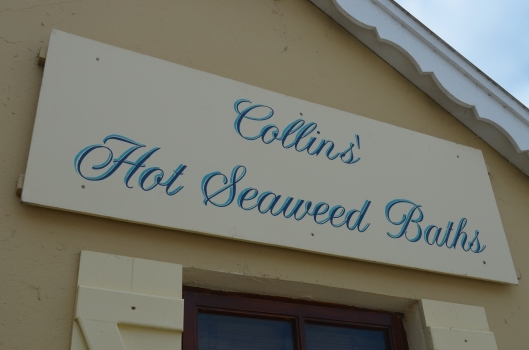 In grade school, Mrs Vaughn gave us a prompt in which we were to write about swimming in a pool filled with anything our imaginations could create.  I wrote about wanting to swim in jello.  Orange jello, to be exact. I don’t think I took breathing into consideration, as it seems like the more one tried to ‘swim’, the more one would sink. But whatever.

Yesterday, I decided to take a seaweed bath.  It’s a local custom in Ballybunion, and people claim it to be excellent for the skin, nails and hair.  They liken it to swimming in aloe, which was right. This is as close as I will ever come to swimming in jello, I would guess, and it was not exactly as I’d imagined. It’s fair to say it’s a slippery, slimy, almost mucous-y experience.  Perhaps like being born, only you don’t have to get your head wet, if you don’t want to.  I, however, did, as I figured I’d never do it again, so why not?

First, a bath was started for me while I waited.  When a few inches of hot water, and a bucket full of seaweed, covered the bottom of the tub, I was escorted into the private bathing space and told to take as long as I liked.  In the room was a tub, hooks for clothing, a bucket, a chair, a mirror, a towel and a clock.  Here it is.  There is also a sign that says “a little hush helps everyone to relax, thank you”.  I can’t imagine anyone hootin’ and hollerin’ in there, but maybe it’s a problem for some.

I have no idea what that other sign says.  Something about being careful getting in and out of the tub, I think.  I forgot about it until I saw the photo.

Relaxing was no problem, though I could hear the crowds at the beach outside clearly, and the comings and goings of the staff and other guests.  The 30 minutes I spent went by quickly.  I added hot water whenever things began to get cool.  The bathtub only got slimier as the time went on, though, and near the end I was wanting eagerly to get out and rinse off.  Don’t worry, ya’ll, I was careful.

Like magic, once I had removed the seaweed from the tub, and placed it into the provided bucket, and I’d begun to towel off, not a trace of the  slime from the seaweed remained.  My skin felt like the petals of a rose and I was sort of groggily relaxed.  I got a latte to go and felt completely rejuvenated.

If you’re ever in this part of the world and ever had a hankering for swimming in jello – I recommend the seaweed baths in Ballybunion.

Lately I’ve been watching “The Tudors” on Netflix, and have been learning about how King Henry VIII lied and manipulated his way into doing all sorts of bizarre and authority-defying things against the Catholic Church, mostly, it seems, because he could.  He was not only power hungry, but consumed with leaving a unique legacy, and also with having a son.  Since his first wife did not provide him with a boy (just the future Queen Elizabeth I, ahem) he opted to annul his marriage to her so he could try again (with the well-known Anne Boleyn, who I guess he also loved a little, for a time.)  The Pope would not allow him to do this, so with the help of Sir Thomas Cromwell, a likewise twisted creature, he named himself head of the church.  When the church fought back, Henry then named himself supreme ruler of everything, with just one above him:  almighty God.   I mean, is there anyone who doesn’t now recognize the name Henry the 8th?  Perhaps you’d think with seven other Henrys before him he’d have somehow melted into the background, but no, he’s the only one history remembers vividly.

I’m also digging Muckross Abbey, a divine and awe inspiring structure falling to ruin in Killarney National park, near Muckross House, which I wrote about yesterday.  I thought I’d give Muckross Abbey a few paragraphs of its own today, since it made its own quiet, but lasting, impression.  Henry VIII should take note.  Quiet, but lasting.

Exploring the abbey was a side trip we didn’t plan for at all, since we didn’t know it existed, but which we were happy to embark on, as unplanned trips are often the very best kind.  On our hike in to the famous Muckross House, we literally came across the abbey, and couldn’t help but take a meandering little path that led us there.

I promise this has something to do with Henry VIII, and I’ll get there in just a minute. But first, come along with me.

There it was, just waiting to be explored.

And it had the most beautiful cemetery I have ever seen.

Every grave was different, and imperfectly spaced.

Obviously, preserved as uniquely as the people who lived these lives.

Some had steps leading to tombs underground – some well tended, some not.

In any case, though the abbey is in ruins and without a roof, it is surprisingly well preserved.  One can still walk inside every room, all grand in scope with very high walls and what would have been enormous stained-glass windows.  It is easy to imagine the lives of those that lived here, in utter devotion to God: where they kneeled to pray, where they kept their burning candles safe, where they lay their heads at night to rest.

See what I mean about the windows?

The abbey also has this beautiful Yew tree growing up in the center of the garth, or square of arches.  It is truly spectacular.

Muckross Abbey was built in 1448, which means that it existed during the time in which Henry VIII (supreme ruler himself) decided to overhaul the entire Catholic Church.  It was he who suppressed the order of friars who lived at Muckross Abbey in 1541, as part of his plan to leave his wife and marry his mistress.  It was he who allowed marauders to destroy the abbey repeatedly in the name of … love?  control?  legacy?  Seems a far-reaching consequence just so a spoiled rotten king can have what he wants.

Then again,  I wonder if good ol’ Henry could have foreseen that I, a woman traveling with her family in 2015, would read upon a plaque that the friary was suppressed in 1541 by Henry VIII and later destroyed completely by Cromwellians, who made it furthermore unlivable and know exactly what went down.  Be it known, Mr. Tudor, that I understand the treachery behind your will being done.  Is that what you had in mind 450 years after your death?

My point in sharing all my learning about The Tudors is this:  sometimes it may look like I’m wasting time watching television on Netflix, but what I’m doing, folks, is researching.  Just collecting information for the day I stumble upon an abbey in the woods and want to understand how it came to crumble.  The answer?  Henry Tudor, King of England. See how those things just come together sometimes like cogs in a wheel?

I love that stuff.

Another connection?  Remember Robert Cagney from yesterday’s post?  This cemetery at the abbey,? The most peaceful and lovely one I’ve ever seen?  It’s to be his final resting place, ‘thanks be to God,’ he said.  For such a unique and gentle soul, this is only fitting.