Today we took a little hike through beautiful lolling hills which were lush, green and slightly wet after an early rain.  But the sun had returned, and near the summit of our walk, we had stunning views of our city, which looked serene from way up there.

Turns out, the “lolling” part, literally mounds of hillside maybe 12-15 feet high, are family burial plots of powerful people who ruled during the 5th and 6th centuries.  I wasn’t counting, but I saw the #20 on one of them – it could have been more.  In their well-chosen,  acreage on the hill they still ruled.  Of course, there was probably not a city below as there is now, but it did make me wonder, what was there and how many people were a part of it?  Also, did they mean for the Korean military to use this land as a training facility?  Because right out there on this little hike were, say 10-12 soldiers setting up tents, laying down wire, you know, army stuff- all in full gear, rifles included.  At first, they smiled and said “hello, how are you, good vacation, good time” and those kinds of nice things.  We asked to take pictures but they declined.  No biggy.

However…in a little bit, four of them came up to us to ask if we would pose with them and have our pictures taken.  This took awhile to figure out, but when we finally did, Guy and I stood pretending to chit chat while they posed around us.  Wah-eird!  Then, Guy went ahead and snapped a picture of one of them while he tried to sort of hide his weapon of small destruction.  And on their merry way they went.  Oops, nope, back they came, wanting to see the picture Guy took and asking him (telling him, really, but ever so nicely) not to “Tweet” the picture or otherwise put it online because their work is “secret.”  So, my friends, you’re just going to have to take my word for it that we had a cool run-in with the Korean army today.

Here’s a pic of the rolling hillside just to prove we were there! 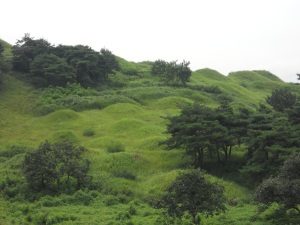 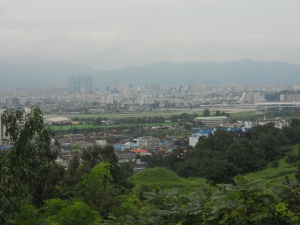 And the view from the top.

Also, we made our way into a part of the city where there are shops and homes.  Here’s a couple of those pics for you.