It was a typically peaceful dinner hour.  I think I was enjoying some kind of soup.  Roan, a friend of Natalie’s, and fellow dorm dweller, came calmly to me and said something like this:  um, Mrs. Hamlin, I think Natalie is hurt.  She fell and she was crying and (nodding)…I think she’s really hurt.  Which, if you know children who are really tough, who play outside for hours at a time, and who have more bruises on their little legs than hair on their head, is code for get up!  your daughter NEEDS you.  NOW!

I was calm.  I only half ran.  But I could see her little arm from 10 feet away, and knew enough to know it was broken.  I’ve been wrong before, both as a coach and mother, when it comes to broken bones, but this was clear.  It reminded me of that scene in Harry Potter where he loses the bones in his arm and it’s all floopy.  Yup, bowls of fun!  My immediate thought was to stop the pain.  Hold it tightly?  Loosely?  Against her body?  She wouldn’t even let me put ice on it.  I just sat on the ground and held her, while she tried to get it into a position that felt …not pain free, but, hopefully…better.  Not possible, as it turns out.

So a cab arrived.  Somebody full of awesome (Gary,was that you?!) must have thought to call one, because I was just sitting on the ground with my daughter, in pain.  Katie, a Korean staff member, already in her comfy slippers, since it was, after all, dinnertime, offered to go with Guy and me to the clinic just a couple of miles up the road.  We didn’t go to the hospital because the international doctors leave at 5pm.  Murphy’s Law.  Poor Cookie is writhing in pain, sobbing and saying, over and over, it hurts, mommy, it really hurts.    The cab driver asked Katie to translate to us that if we have a real emergency in the future, we really need to call 119 for an ambulance.  Good to know.  119.  Got it.  But here’s hoping there’s no next time.  He was sweating the rush hour traffic and working hard to either get us where we needed to go, or to get our wailing child out of his car.

We arrived at the clinic to a small crowd of doctors who turned and sprang into motion at the site of her.  Exrays here (not one but two broken bones.)  A sling there.  Kind words and smiles here.  Oh, but a necessary reset of the arm there.  Oh boy.

When it was time for that little gem of a manuever, even the doc in charge heaved a heavy sigh before he moved in.  No anaseptic, Katie kept saying, no anaseptic, okay? — which was really “no anesthesia”– Natalie still doesn’t weigh 50 pounds.  She’s too little for anesthesia.  No drugs.  No nothing.  Set those bones with just me holding onto her and her sucking thumb to soothe her.   I don’t know why I didn’t hesitate to be the one to go in to the room with her.  “Uma! (Mumma!)” the doctor directed “Go!  Yes?”  and I nodded “yes, of course” and in we went.  Remember, it took me 8 years to go in with Luke to have a treatment on his birthmark and that’s a laser, for crikey’s sake.  This was resetting two tiny bones in one tiny little arm.  And I hope I never have to do it again.

So here she is, with her big ol’ splint. 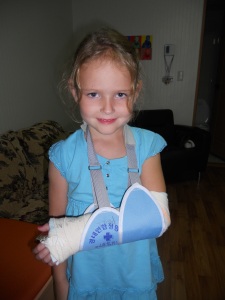 We still need to go get her into a hard cast, but the swelling hasn’t subsided yet.  Might THAT have something to do with reefing on her arm for 3 solid minutes?  Yowzers!  She says the experience hasn’t been too bad.  She has forgotten the bone resetting (I LOVE the brain of a child!  I want one!)  She gets to sleep in our bed, and have her backpack carried for her, and her food tray too.  She snuggles with me every afternoon before and after school and we play Crazy 8’s until we can’t stand it.  We even bought her an ice cream today.  Her favorite strawberry one.  My little nugget.  There’s nothing like seeing your child in pain, nothing that makes you feel more helpless or more vulnerably human.

When they had ended their manipulation of the bones and she was calming down into yawn after yawn from the adrenaline leaving her body she saw that I, too, was crying.  She turned to me and said, I’m sorry, mommy.  I didn’t do my homework.  She was back.  Priceless, priceless girl.