Our two boys showed their natural affinities for activity very early on.  Garrett liked to throw things, hit things, run as fast as possible in whatever direction we were moving, and to push his body to its limit at every opportunity.  He also loved to yell.  To climb things.  To stay awake until he would fall asleep sitting straight up in his chair at the dining room table.  He could not have cared less about food, snuggles, the needs or wants of other human beings.

Luke, in his turn, discovered that he didn’t need to move a mile a minute.  He watched first, so that when he was ready to try something, he could do it with precision.  Slower maybe, but more accurately too.  Easy laughter and acceptance of all people and any situation have been the qualities that have drawn people to Luke since he was an infant.  He loves all things sensual:  food, warm water, hugs, conversation.  He thinks of others first.  Also – that boy can sleep!

So when Natalie came along and, even as a toddler showed no real magnetic draw to – well, anything – we were shocked — having expected our third child to pull us into her particular orbit as the boys had.  However.  She’s not a risk-taker.  Nor is she a watcher.  In fact, if she watches too long, she just loses sight of getting in there and trying things herself.  Which, come to think of it, might just be her M.O..

She’s happy-go-lucky and will take part in whatever we are doing (or, now, whatever her friends are doing) but she doesn’t demand anything for herself.  She follows.  Yet she’s no pushover.  She’s downright bossy.  But it’s almost as if she’s just trying on that personality for size, because even in her bossiness, she’s not offensive, rude or unlikeable.  My point is — I don’t think she’s fully hatched.

Is this because she is a girl?  A third child?  We’re not sure.  But we’re still trying to figure out just what is going to bring that girl the utter joy that Garrett feels on a baseball field and Luke feels in a pool.  Who doesn’t deserve to find the things that make them come alive?

So.  This year, she thought she’d try horseback riding and we wholeheartedly agreed to make it happen.

Tobasco Stables is in Belmont, only a few miles from our house.  My friend and former colleague, Avis, and her daughter, Megan, own it and give lessons at “camp” in the summer.  Natalie spent 4 days taking care of and riding Jack, a stunning Appaloosa who loves apples, being brushed, and, as it turns out, Natalie.

A girl and her horse – a truly beautiful thing.

Jack is a good horse.  He is gentle and slow moving, and patient.  When we would arrive at the stable he would greet Natalie outside, at the edge of the fence, and he would whinny when she walked away to go home.  He knew she was his for the week and wanted to be friends.  But Jack is big.  And Natalie is little.  And she spent 4 days hoping she didn’t get trampled on. Which wasn’t the basis of what she needed in a relationship.

Here, in this pic above, off the horse, she was most comfortable.  Grooming and petting are her thing.  Riding, however, took her to the edge of her carefully carved out comfort space, and, sometimes, over.  Can you hear the crack?

She is totally thinking “whoa, Jack, whoa” – her favorite phrase of the week.  She also thinks she’s moving at the speed of light.

She so wanted to love horseback riding.  She just didn’t.  She felt small and afraid and not at all in control.  Which Jack knew, and accepted, but which she didn’t know, and couldn’t, therefore, accept about herself.

So when we left the stable in July, we didn’t go back.  We asked her if she’d like to continue lessons and she squinched up her nose at us, big blue eyes blinking.  “I don’t think so,” she said, “okay?”

Of course okay.  So we keep looking for a spark that makes this girl’s heart leap up. 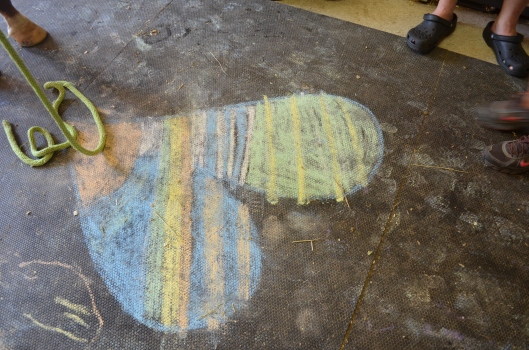 She fell in love. But not enough to make her stay.

4 thoughts on “The Rabbit and the Hare. And Natalie.”