The gifts had all been opened and the last of the Christmas bows rolled to a stop like a tumbleweed in the old west.  I sat with a steaming hot cup of coffee, gazing at the lights on the tree, counting my blessings.  Garrett and Luke were setting up their new gaming system, each taking his turn creating avatars to use in their games. They laughed as they chose body types, hairstyles, clothing styles, facial hair styles, and face shapes.  Lastly, they got to choose a skin tone for the online versions of themselves.  There were 24 choices, up from 6 in the past gaming system they’d had.  Progress.

Luke clicked through them once, twice, again.  He then exclaimed, “mom, there are no choices with birthmarks!”  I glanced into the playroom, but I didn’t have to say anything:  he was glaring at the screen.  “I’m going to write them a letter,” he said, “they should have more real faces on this thing.” 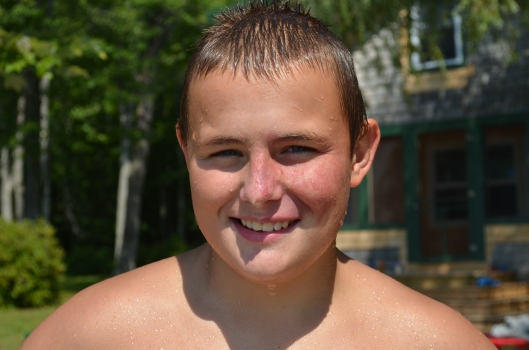 For those who don’t know, Luke was born with a port wine stain which covers about 1/3 of the left side of his face.  He was also born with tremendous help from a gigantic suction apparatus and didn’t breathe for the first two minutes of his life.  So, when the doctor, after being in full panic mode, had helped Luke to breathe, and had then brought him over to us, gently breaking the news that he had a birthmark, a large, noticeable one on his face, Guy and I were confused, not sad or upset.  We were confused because we were indescribably delighted.  I remember saying “is that ALL?  He didn’t BREATHE for two minutes! Is that IT?!”

There were several months in which doctors were not sure.  They explained that most children born with a port wine stain on their foreheads also have Sturge-Weber Syndrome, that it affects their learning abilities, their speech, their IQ.  They were still unsure just why some babies are born with their veins too close to the surface of their skin, and still unsure as to why when that occurs on the head, the brain is affected. Luke’s birthmark reached only slightly onto his forehead, so we watched and waited. We met several children with Sturge-Weber Syndrome in the offices of Doctor Tan, the leading specialist for port wine stain removal on the East coast, located in Boston. We learned all we could about this condition as Luke was very busy sleeping his way through the first days of infancy.  It turns out we worried unnecessarily.  Within a year we knew Luke was learning and growing normally.

We began the process to remove Luke’s birthmark when he was 3 months old, on the strong recommendation of Dr. Tan.  This is not an easy decision to make for another human being.  Guy and I were both perfectly fine with leaving Luke’s birthmark on his beautiful face (I mean, LOOK AT HIM.) but Dr. Tan, and others, were quick to point out that starting the removal process early meant greater success, and that if we waited until Luke was old enough to make the decision for himself, not only would it be harder to remove, but more painful as well. We learned that untreated, port wine stains darken with age, and that they also begin to raise, become bumpy, in puberty, which is difficult for men who want to stay clean-shaven.  We wanted what was best for our boy.

What it meant for us was making a trip to Boston every six weeks.  On the way, we would stop at a rest area to apply a topical numbing anesthesia that we would then cover with saran wrap.  The earliest days of this were not a big deal, except for the fear of getting the lotion in Luke’s eye, but as he grew, he would spend the remainder of the trip trying to remove the plastic wrap in any way he could.  If you don’t think babies are strong little creatures, I share with you that we called Luke “BamBam” in his earliest years because of his muscle structure and strength.  I urge you to picture Guy driving through Boston traffic near the end of the Big Dig.  Picture Garrett, age 2 singing at the top of his lungs, and me, trying to hold the arms of an Iron Manchild as he wiggled and struggled and cried.  We generally made this trip in one day because of finances.  We spent 8 hours in the van to spend 15 minutes in a doctor’s office.  It was a high stress trip.

Worse still, was that the laser removal device was painful for my child.  People say it’s like being snapped with an elastic at close range.  For Luke, it always appeared more like being shot with a BB gun.  Repeatedly.  This is not an easy thing to watch as a young, trusting, vulnerable, protective mother.  I would sob all the way through his treatment, which lasted but a few minutes, after which we were offered a baggie of ice to hold on his burning face.  This too, caused Luke stress, so I would snuggle him and we would cry together as the pain dissipated.

But this story is not mine.  So let me tell you about things on Luke’s end.  We went to Dr. Tan for two years, almost never missing a treatment.  We had been told in the start that it would take 10-12 treatments to fully remove Luke’s birthmark.  Dr. Tan was flummoxed about Luke’s case.  When it became clear that the treatments were doing almost nothing to change the look of the birthmark, we stopped going.  We stayed out of Boston for another three years.

Then came school and new friends – people who had never met Luke nor seen a birthmark like his.  He became self-aware because others were pointing out his difference to him.  In late fall of his kindergarten year, in his little red sneakers and lime green backpack, Luke came home one day and asked if there was something we could do to remove the birthmark on his face. 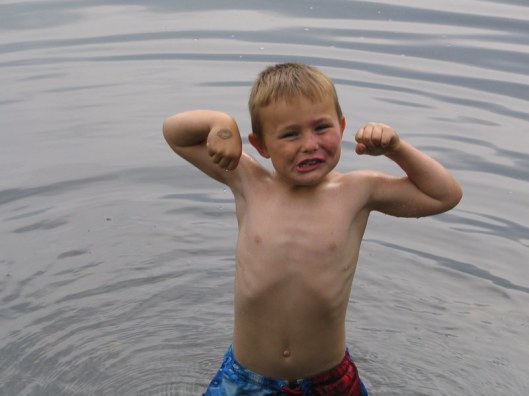 After sitting and talking about it, we decided to give the treatments another shot.  This time, it was life changing, and not because the laser did anything at all to change the birthmark on Luke’s face.  It didn’t.  But this was when we could see, and Luke could communicate, what the treatment did to him.  He didn’t yet have, or couldn’t form the words, but he communicated clearly enough.

First came the wringing of his hands.  Then the rocking of his body.  Then the counting.  Luke began to count things.  Steps it took to get to the kitchen.  The number of telephone poles between home and school.  The tiles on the living room ceiling.  Not all the time, not so that he couldn’t leave the house or go to sleep or anything.  Besides, the counting thing was all in his head, and he only rarely mentioned it, so we thought little of it. But then came the thing that was happening all the time:  the blinking.  Luke was developing, had developed, tics.  The tics were in direct correlation with one of two things.  One, mentioning Dr. Tan’s name.  Two, having a treatment.

What we would do was this:  we would have an appointment scheduled, and two days before – we would tell Luke about it.  For those two days we watched our son sort of turn inside himself, wringing hands, rocking, counting, blinking.  He kept telling us that he wanted to go to Dr. Tan, he wanted his birthmark off his face.  So we kept going.  I want to say we went another 3-4 times. At these appointments, I stayed in the waiting room.  I was no longer able to watch him in pain.  Guy said he had all he could do to hold Luke’s arms at his sides.

In April of his kindergarten year, we made another appointment in Boston.  Two days prior, we told Luke about it.  The fear was immediate.  Though he had chosen to continue treatment, Luke was clearly adversely effected by them.  He stood in the living room as we told him we were heading to Boston, rocking his body front to back, twisting his fingers and blinking non-stop.  When he went to bed that night, I sat with Guy and sobbed.  I had had enough.  I went upstairs, awoke my beautiful boy, brought him downstairs and told him we were all done going to see Dr. Tan.  And just like that.  The wringing, the rocking, the blinking – ceased.  (In all fairness, the counting and other compulsive behaviors continue — but that’s a story for another day.)

We never returned to the offices of Dr. Tan.

I won’t pretend to make you think I believe that Luke doesn’t sometimes wish the birthmark could have been treated into disappearing, maybe he does.  He probably does.  I have spent more time worrying about it than is healthy because I actually do not see his birthmark on his face and often have to stop to even remember what side it is on.  It is an absolute non-factor in my love for and relationship with – indeed, in my seeing my son. Close friends say the exact same thing.

This also reminds me of the first thing Garrett said about his brother when he came into Pen Bay Medical Center to see us after Luke was born, mere hours after the not-breathing debacle.  Garrett sprinted into the room, as he always did, and came to a complete stop when he saw his “Lukie Lukie Lukie” as he’d been calling him when I was pregnant.  “Oh!”  Garrett declared, age 2.  “His face is red!”  “It is,” Guy answered.  And that was that.

It’s others who hurt him, people outside his circle of normal daily living.  I am forced to remember this when we are out in public, typically somewhere out of Belfast, say, the mall in Portland, or the water park in Saco.  (Being gone for a year to Asia was particularly hard on Luke, and I’m sure this is why.)  People gawk. They do double takes.  They do that thing where they turn their heads away, but keep their eyes on him, like we won’t notice their lizard-like staring.  Luke, for his part, won’t make eye contact, puts his head down and moves to stand slightly behind me in these situations.  It’s probably subconscious.  I am completely conscious when I make certain to meet the eyes of whoever is staring at him, widening them ever so slightly when they see me, as if to ask “what?!”

Luke was 13 years old this past Christmas when he discovered the limitations of his avatar on his new XBox.  He wanted that birthmark on his face, even on a screen version of himself. It was such a non-moment moment I didn’t think about it until very recently.  Age 13 is arguably the hardest time to be in your skin, but in this very small way, Luke seemed to be saying that he’s alright in his.  There is nothing I want more for my child than this. 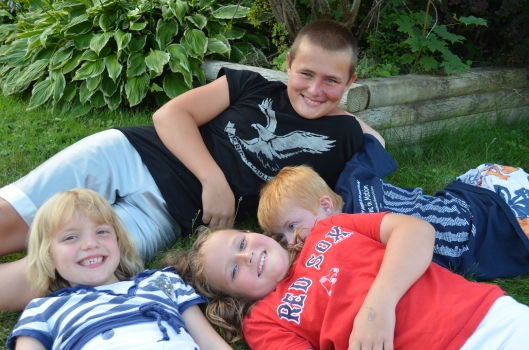