The title of this blog makes it sound like we’ve been involved in either a flashmob sequence or some kind of new fandangled, um, adult video or something kinda like it.  Donghwasa, however, is a compound of Buddhist buildings about a 15 minutes bus ride from here. ( That is, if you take the right bus, don’t have to walk for 40 minutes uphill in humidity that feels like a steam bath with three kiddos – but that’s a story for a different blog.)  Let’s say it took us fifteen minutes to get there on the Express #1 bus, which is oh-so-super-simple to figure out.

As I said, Donghwasa includes many different buildings, some used for worship, some for the monks who live and work there, some for idolization of gigantic figures that are at the same time intimidating and slightly comical (mostly because they are painted in primary colors and are so…plump!)  You can walk around the grounds with your camera, chit chatting about this or that and walk RIGHT in on people praying, lighting candles or taking part in other rituals of Buddhist religion.  This seems a faux pas of some sort, doesn’t it?  Nope.  As long as you remove your shoes, it’s all good.  Everyone is welcome. 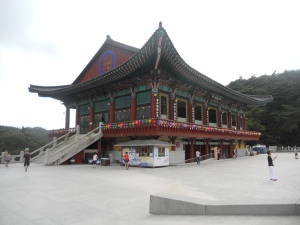 We were careful to remove our shoes and to remain respectfully quiet.  It seemed the logical thing to do where people were both walking around with their Pepsis and enjoying their ice cream cones, and bowing down in prayer.  What was most strikingly juxtaposed were the monks meandering around – clearly going about their normal Buddhist monasterial day – amongst visitors from near and far.  I did not take any photographs of them, I felt it somehow over the line of intrusive, since I’d been peering in the doors where they clearly lived their lives – even where they ate and slept.

This building above was built in the year 489, just to help you understand.  There is now a coffee shop to the right of the stairs there.  Not the little shack, I mean it’s in the building, sort of underneath.  There are also two little gift shops where one can purchase any number of beaded bracelets or necklaces or keychains or dishtowels with Buddhist icons printed along the edges.  I never could grasp the feeling of sacredness I was looking for – it was just this side of …what’s the word?  Kitschy?

There is also a gigantic Buddha statue, built in 1989.  I will include a photo here, along with a couple others, to show you how big it is.  Big.  Buddha.  No.

Joke.  It was a nice trip – a place I would like to revisit, actually.  Since Chuseok is a holiday about giving thanks, I give thanks for my beautiful, enthusiastic, adventurous, happy kids and again for the opportunity to be here and to see things like this.  It’s — what’s that word I read on a blog months ago – one written by a Korean living as an expatriate in America — it’s “breathtakeable.”  That’s it exactly.  It takes my breath away. 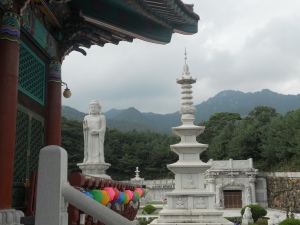