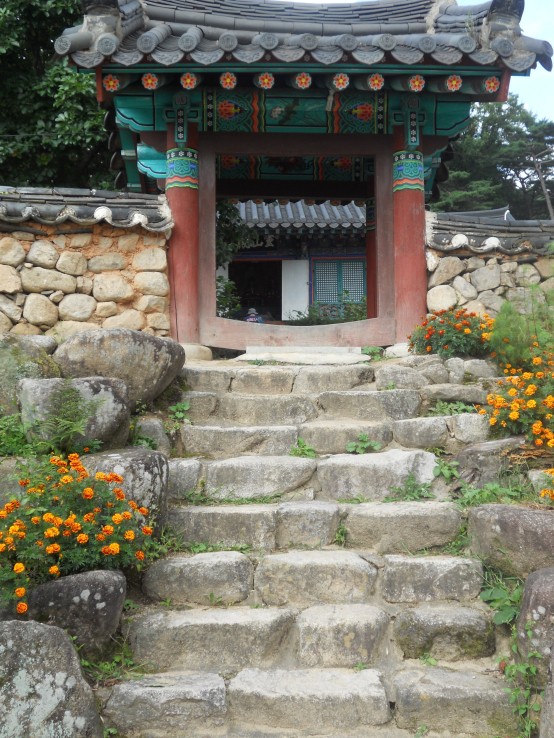 Chasing Guy up these ancient stone steps (see his tiny little travelin’ hat up in there?) I was not watching where my feet were going and I sort of falooped over – you know;  tripped, faceplanted, took a digger, plummeted into embarrassment.  In my defense, people who are laughing, (you know who you are – Jane!) I was wearing super cute sandals, not hiking boots, as could easily have been suggested by whoever the heck’s in charge at Donghwasa Temple.    Also, for the record, I never did claim ‘graceful’ on my life resume.  Still.  No blood, no harm, no foul, no need of a monk to the rescue.

Though my husband didn’t notice – my stumble, ever so charming, did attract the semi-attention of a middle aged, thick necked Russian tourist who looked over at me sideways, puffing on his cigarette and blowing smoke in my general direction.  “OK?” he grumbled.  Squinting up into the sun behind him,  I chirped “yup…just offering up a little prayer, you know, for the ground.”  “Unh,” he grunted.  And walked away.   Good times.

I got up, as people tend to do, and kept trudging, albeit more slowly than my trail blazing husband who, no doubt, has always been leading the way when it comes to taking a new path, however steep or…stoney.  I blame it on my birthday.  I’m a Cancer, the antithesis of trail blazer…much more of a homebody, in all respects.  But here’s the crux, I’m also a Gemini (June 21st being the day I made my way into the world, on the exact cusp of the two zodiac signs).  Which means, if any clout is to be attached to the stars’ alignments or moons and other astrological thingies floating in and out of the paths of the planets (or whatever), then I am not one personality, but three.  Cancer and the twins, all at once.  That is why close friends would tell you I’m either the life of the party, dancing on the proverbial bar, or the one playing Scrabble at the kitchen table until the wee small hours of say, 9pm, when it’s time to hit the hay, internal sorority girl be damned!

I lead students, in a classroom, for a living, and I do a fair job at it, if I’m self-evaluating.  I am not, however,  a leader when it comes to doing anything new like, say getting bangs – or hey, here’s one:  moving thousands of miles away from home .  I’ll be in the right place at the right time with the cool kids, sure, but I lurk, take painstaking mental notes, stay in the background, usually, until I’ve got a grip on the way things roll…(hello, Cancer) and only then do I forge forward, inevitably adding and finagling some kind of unique twist (bonjour, Gemini) that only makes it appear that I was the creator extraordinaire all along.  It’s a facade.

Take this trip to Korea, for example.  Because I am the more outgoing, more rambunctious, and also friendlier half of this Hamlin duo, people readily believe coming here was my idea and that any and all of the fun stuff is due to …moi.  Again, untrue.  It took me two full months to feel comfortable taking a cab to Home Plus and three to do it alone.  On anyone’s scale of adventurous this measures pathetic with a capital Pah!  From the get-go Guy was jumping into conversations with strangers, making all kinds of terrifying grammatical mistakes, while I was seething that the bus was Making. Me. Sick!  He was eating bug larvae, octopus tentacles and fish with the heads still on while I daintily sipped at my saltless broth, thank you very much.  He was driving on the wrong side of the road, from the wrong wide of the RV (this, while in New Zealand) as I napped happily in the back.  Wake me when we get there!, I’d yell, and I was out like the pansy I am.

So what are you even doing there, then?  you ask, and have asked, and keep asking.  Oh, how many times I’ve wondered that myself.  I mean – I know why I didn’t come here.  I didn’t come searching for anything, wasn’t unfulfilled, wondering who am I? What am I doing with my life? Are we there yet? as many travelers are.  Wasn’t searching for the meaning of life, or the holy grail or ruby slippers.  The answer, it appears, is much more simple. I’m here because Gemini girl is alive and well and will not be ignored, Dan.  She is 23, sassy as hell and doesn’t care at all if she trips and falls in front of an overweight, unhappy Russian.  She slips the strap of her super cute sandal back onto her suntanned ankle, does a little hair shake is off again…up the steep, stoney steps, or whatever she happens to feel like climbing.

I’ll keep Gemini girl.  I like her.  She balances me out.  She sometimes tires me out, too, but I’ll tell you what – without her, it’s likely I’d be content being the ugly 1970’s wallpaper you remember from Aunt Ethel’s house. Happy to wile away the hours looking at pictures on a webpage instead of seeing the world.   This is no way to live.  Not for any of the facets of me.   Consider this:  if I’d never come to Korea, it’s possible – quite likely, in fact – that I’d’ve never learned the word zoysias: a low-growing grass native to tropical Asia.  And that’s tragic.  ‘Cuz strategically placed,  it’s a whole lotta Scrabble points scored against the man in the silly blue hat walking up ahead.