I’m not going to mince words, or put together gorgeous strings of them that are meant to do certain jobs, or even sound literary at all.  I’m travel-tired and I’m just going to say it: Great Blasket Island is fecking astounding.

(I learned the word fecking today.  It’s bad, yes, but it sure is fun to say.  You can have it now. You’re welcome.)

Great Blasket Island is the second most beautiful place I have ever seen.  It rises to the occasion of needing that word my Korean student used which doesn’t actually exist…breathtakeable.

I took this first photograph at the visitor’s center on the mainland and this next one while hiking.  I’m certain the scale of these doesn’t translate in my photos, but if you were standing just there on the edge you’d look quite small indeed. 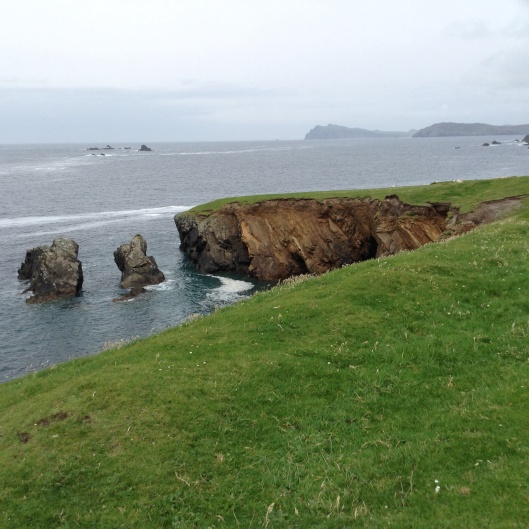 Great Blasket was once the home of a unique community of Irish who braved the sea’s torment year-round.  Several writers emerged from that community, perhaps the most famous among them Peig Sayers and Tomas O’Crohan.  Myths and folklore provided rich soil in which to grow most abundant stories passed down through generations.  The Irish government removed the last 27 inhabitants off for good in 1953, and the only ones who live there now are sheep, an overpopulation of hares, and two wild donkeys, one I called “Rasta” for reasons obvious in the photo below.

One may also tent/camp on Great Blasket Island, with no permit whatsoever, but if you aim to do this, I suggest you do it soon.  I simply can’t imagine they’ll let that go on much longer.  The world is beginning to make its mark out there.

As it is, guests are allowed complete free reign of the island.  You can hike anywhere you want, visit the beach to swim with the seals and dolphins, and climb in and amongst the ruins of the homes that once stood proudly on the shores.  You can touch the hearths of the people who built the homes with their hands more than a hundred years ago, and you can lay where they lay their weary bodies at night to sleep, sometimes a family of ten in a room the size of a large bathroom.

When you finish your exploration (and to circumnavigate the island on the best marked trail will take you about 90 minutes) you can sit down to a cup of tea and a scone at the small rustic cafe overlooking the beach and the mainland.  That’s what I did.  I highly recommend it.